Script to Create Shortcuts to the Exchange Toolbox tools

Other Versions of Exchange

This article is also available for other versions of Exchange. 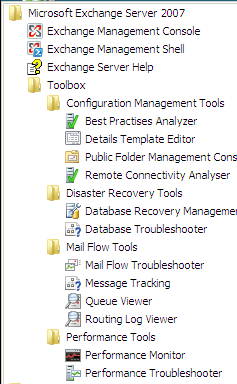 You can either create them manually, or use the script on this page, which creates the menu structure shown on the left.

To use this script you need to be using:

While the script will create shortcuts on any machine, they will only work on a system with the Exchange 2007 management tools installed. These shortcuts are based on Exchange 2007 SP3, so if you are using an older revision of Exchange 2007, they may not work.